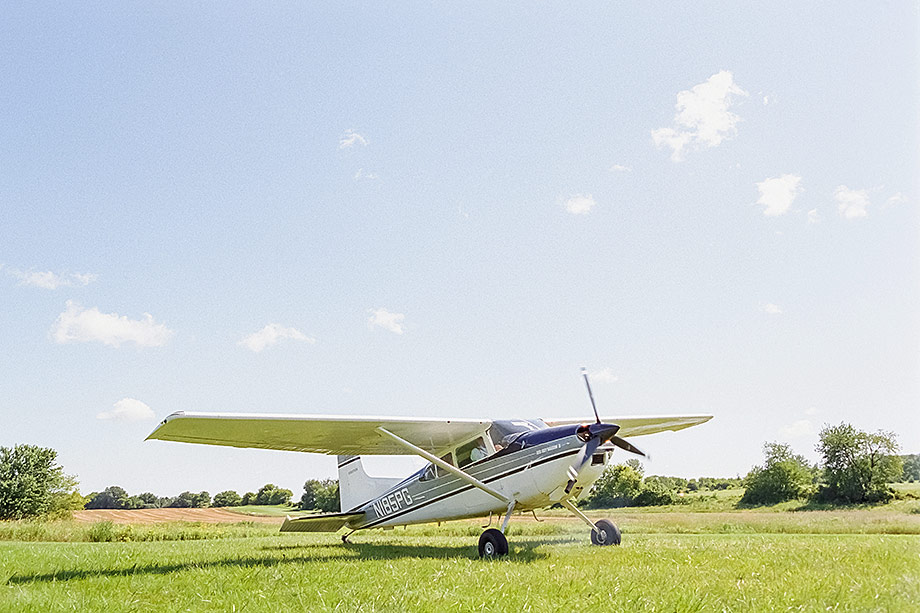 Preamble:  It is with a very heavy heart to write that Ken, the man in these photographs, passed on today.  I’ve always thought of my being a photographer as akin to being an historian as much as an artist.  Today I feel privileged to have immortalized this man and his son with these photographs.  Ken’s life has gone far beyond these visual constraints and he will continue to influence the world through the coming ages because he was such an amazing man.  The heaviness in my heart is lightened thinking about Ken’s touch on our world and makes me think of a child’s lost yellow balloon floating up against the blue sky.

While I’m sure there’s a lot going on in the mind of a baby, I can’t claim to remember a single moment from that time in my life. My childhood memories, however, are crystal clear and almost completely revolve around aircraft and flying. If I hadn’t been blessed with bad eyesight, I would have joined the ranks of Maverick, Iceman, Chappy Sinclair and Doug Masters as an ace fighter jet pilot slipping the surly bonds of earth and dancing on laughter-silvered wings. There was literally nothing of greater importance to me than flying. I remember being enveloped by awe when my father Jim told stories from his days traveling the globe as a loadmaster on a C-130 Hercules in the Air Force while he drove me to the Experimental Aircraft Association and to the end of the local airport’s runway to watch planes land and take off. It was through my father that I met his co-worker Mark and his father Ken Corbett. Ken was a pilot for the Wisconsin Department of Natural Resources and Lunda Construction.

My parents tell me that when I was a baby they loaded me and my sister Sara on a MD80 jetliner to fly from Oshkosh, Wisconsin, to Kansas City, Kansas, to visit my mother Vickie’s family in Marquette and Wilson, Kansas. As stated I was too young to remember it and I don’t consider that my first flight. Since memories are the very core of our existence, my first flight happened because of Ken Corbett when I was 10 years old in his Cessna 185 Skywagon II. Taxiing down the taxiway at Oshkosh’s Wittman Airport the day of my first flight, sitting in the co-pilot seat, feeling more anticipation than I’d ever felt is a moment I’ll never forget and continues to influence everything I am as a person. A lot happened in my mind as we bounced and jostled toward the runway. I was so overwhelmed that I almost re-live that moment more clearly in my thoughts than when I was actually there! Ken’s hands gently gripped the controls. I looked up and saw the sun dancing through the distorted plexiglass, illuminating his beautifully weathered face while he radioed the tower for clearance to take off. I remember the smell of decades of flight that the old Skywagon had been through as Ken pushed the throttle to full and we lunged forward down the runway. The world around me was squeaking, jumping, jostling, vibrating and shaking until Ken pulled the wheel back and suddenly the world went smooth and silent as we soared upwards toward heaven.

It was such an honor to be able to visit my hometown recently of Oshkosh, Wisconsin to photograph Ken and Mark together with their aircraft. The Cessna 185 Skywagon II on the left is the very plane that took me for my first flight.  Mark’s Champion Citabria is on the right. 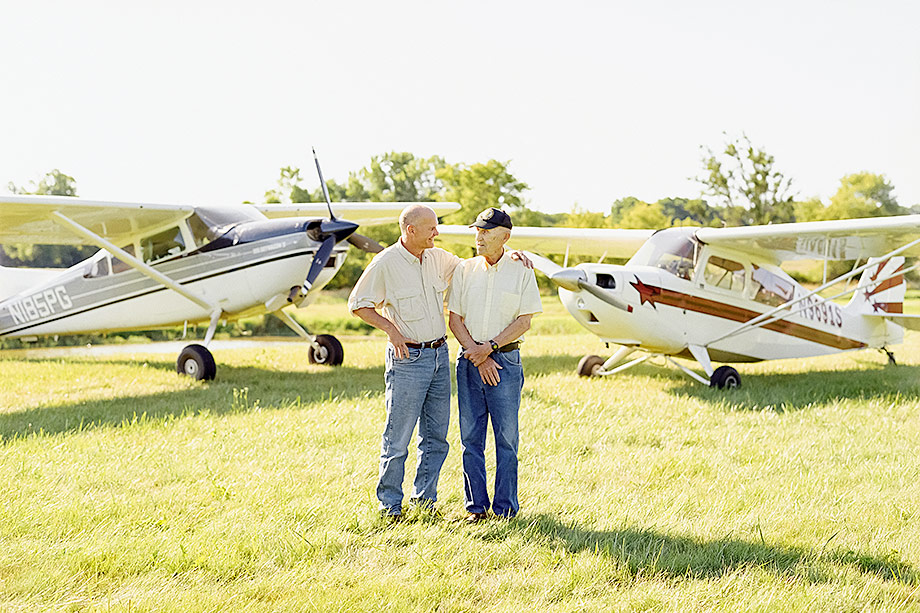 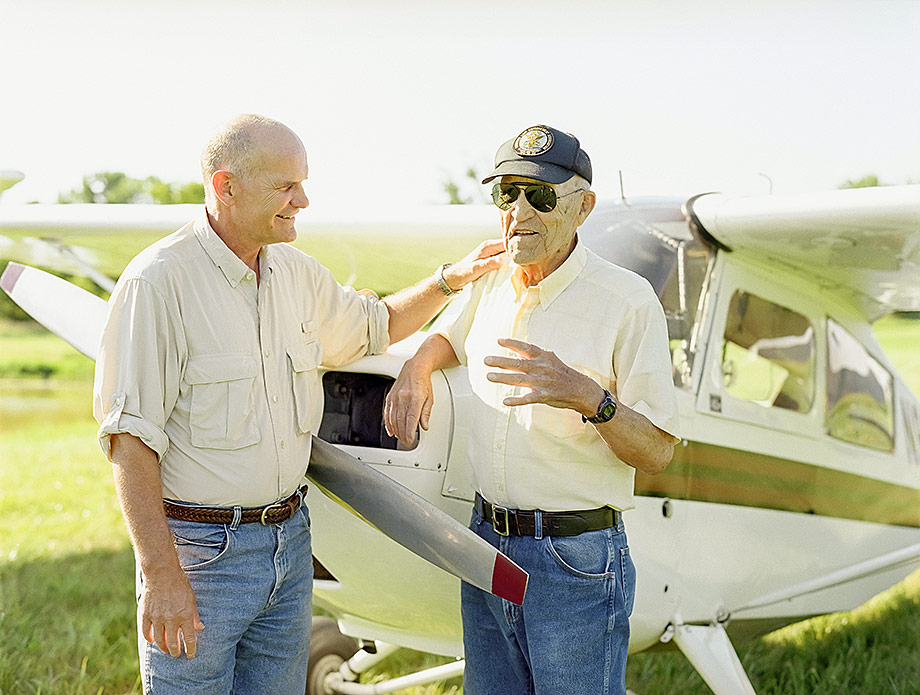 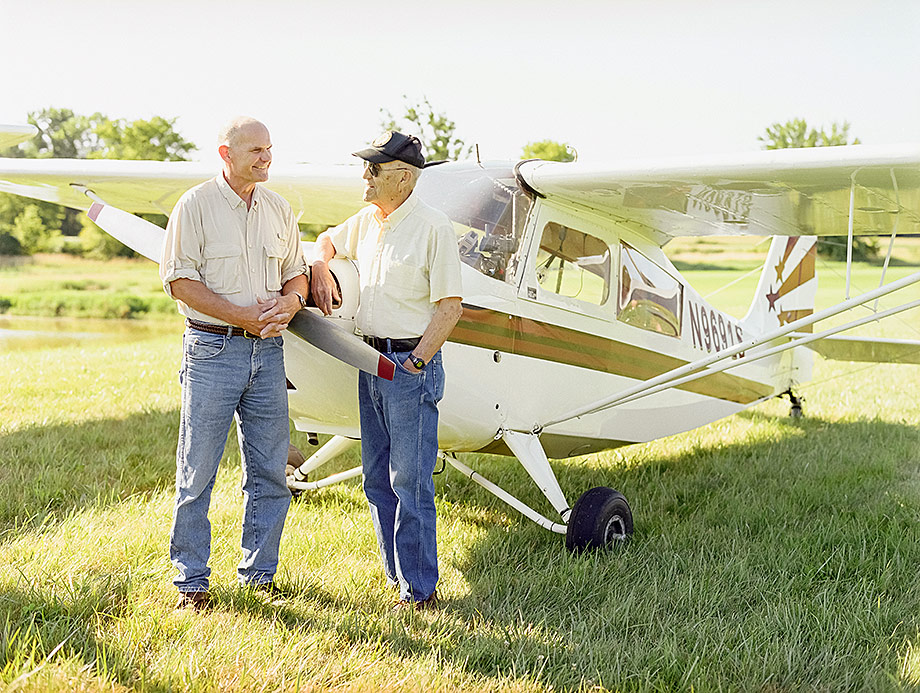 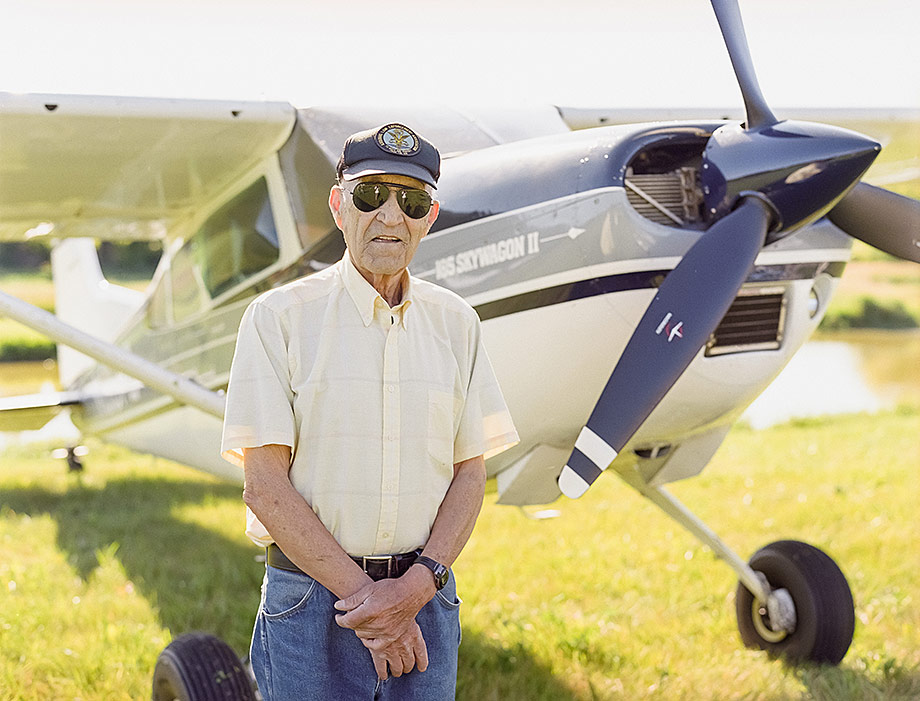 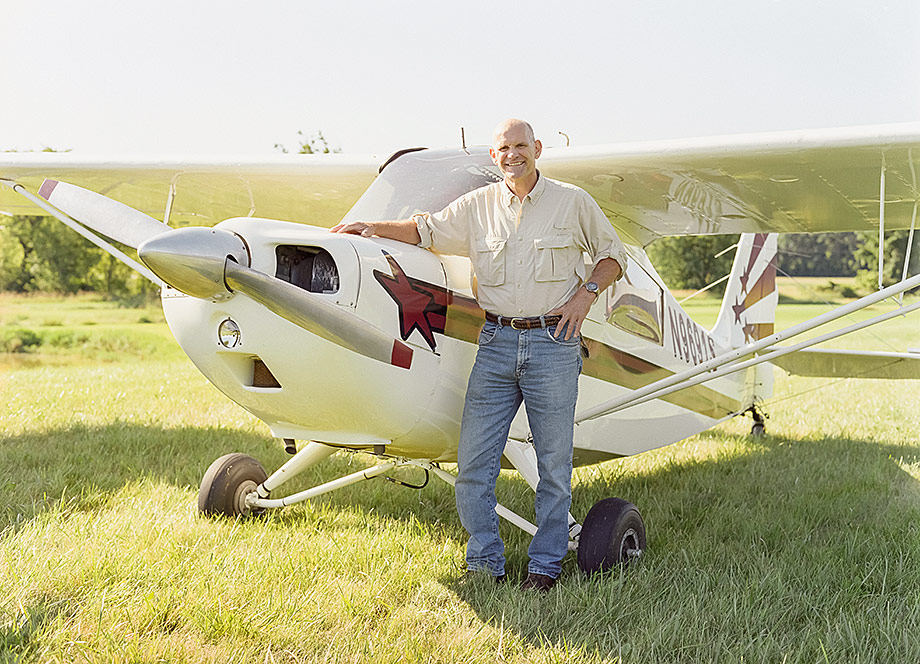 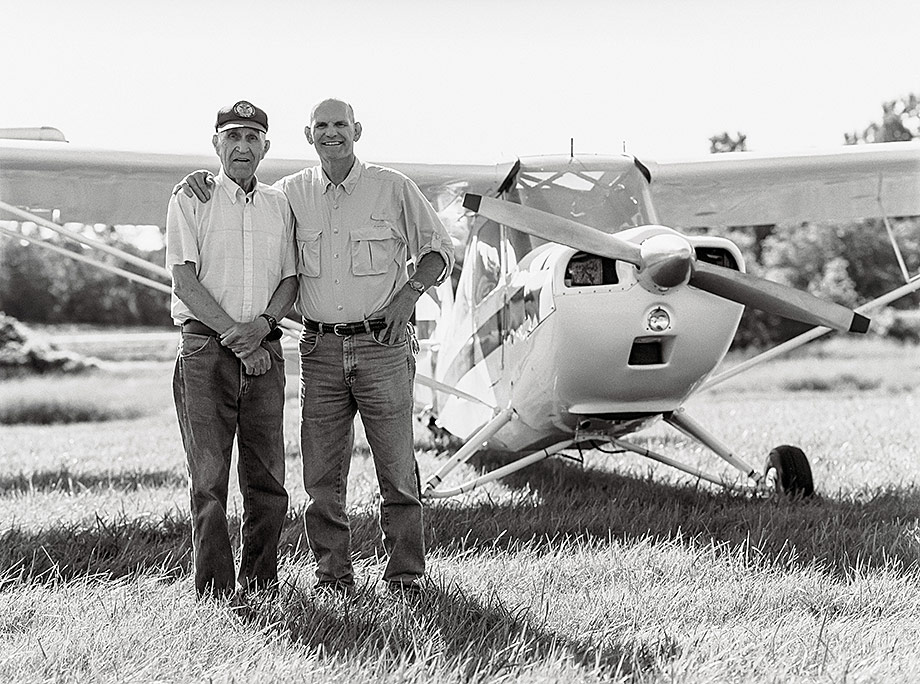 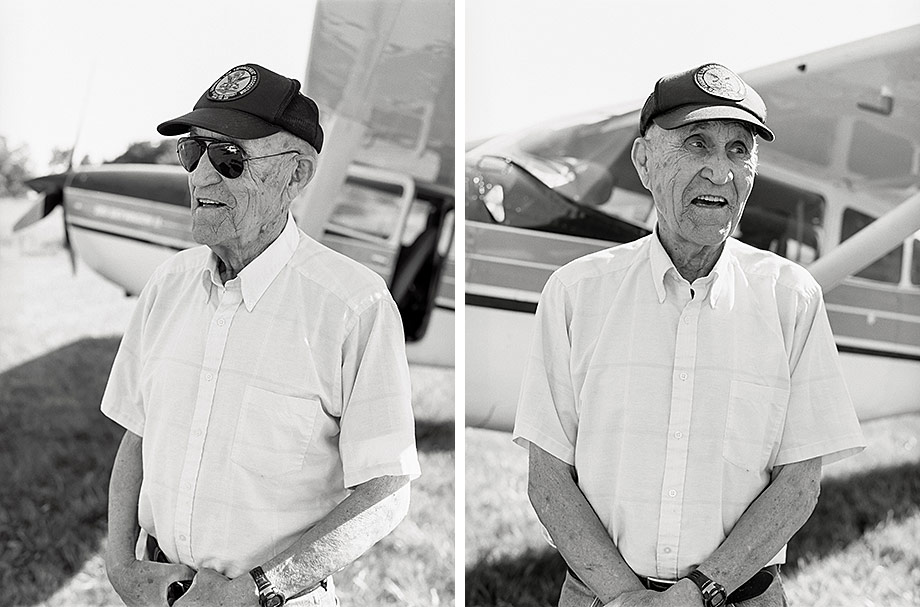 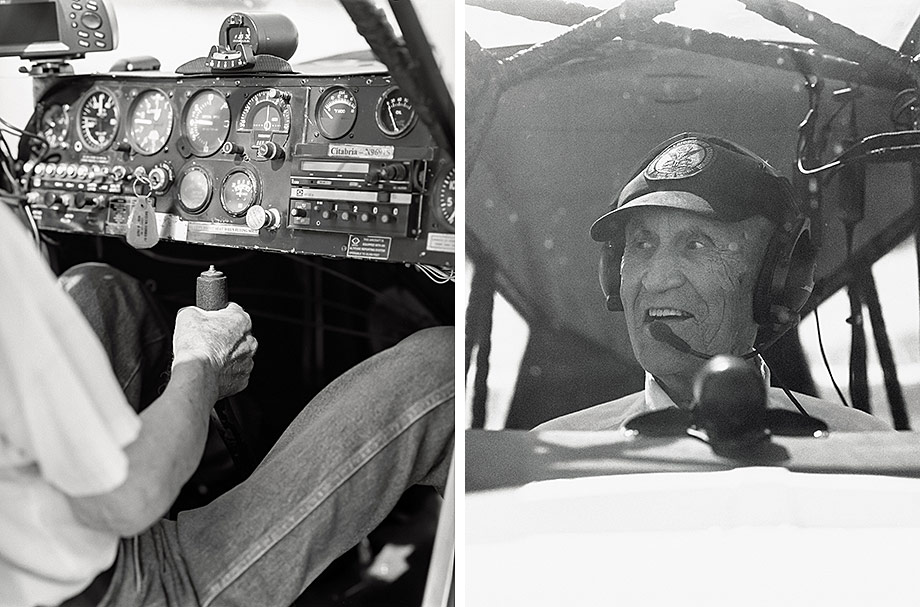 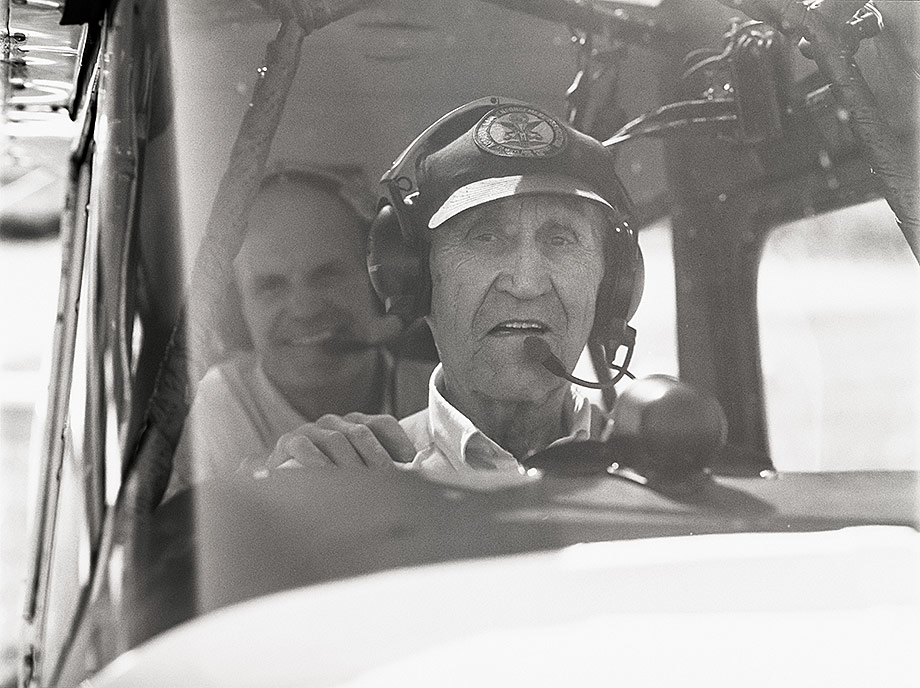 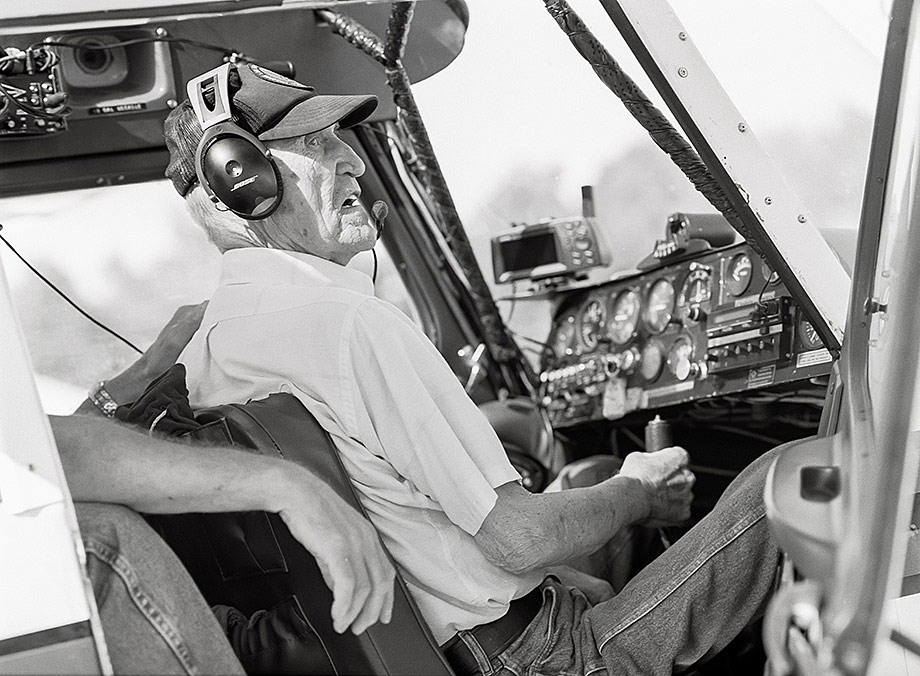 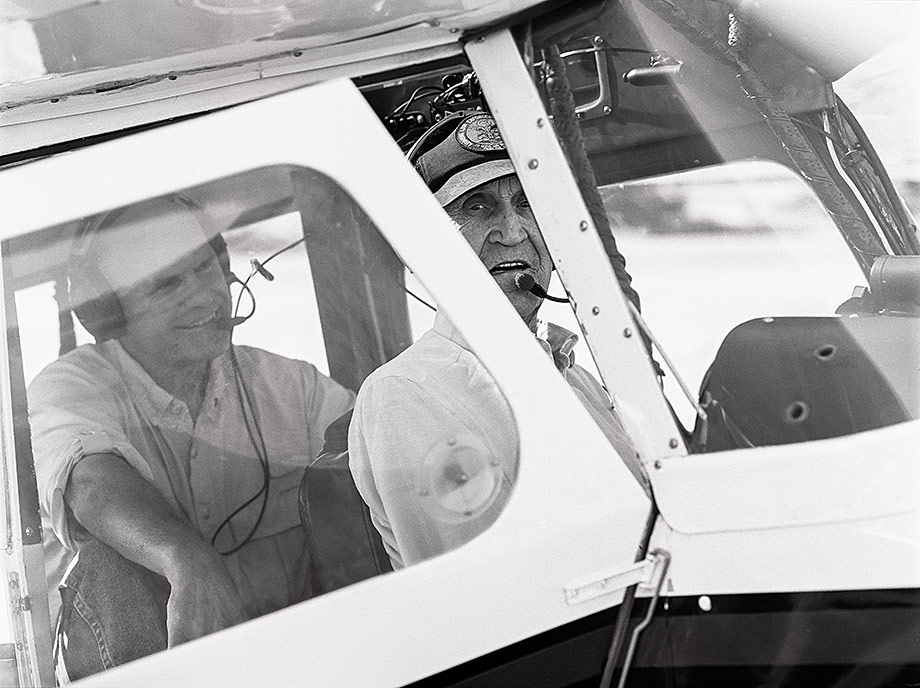 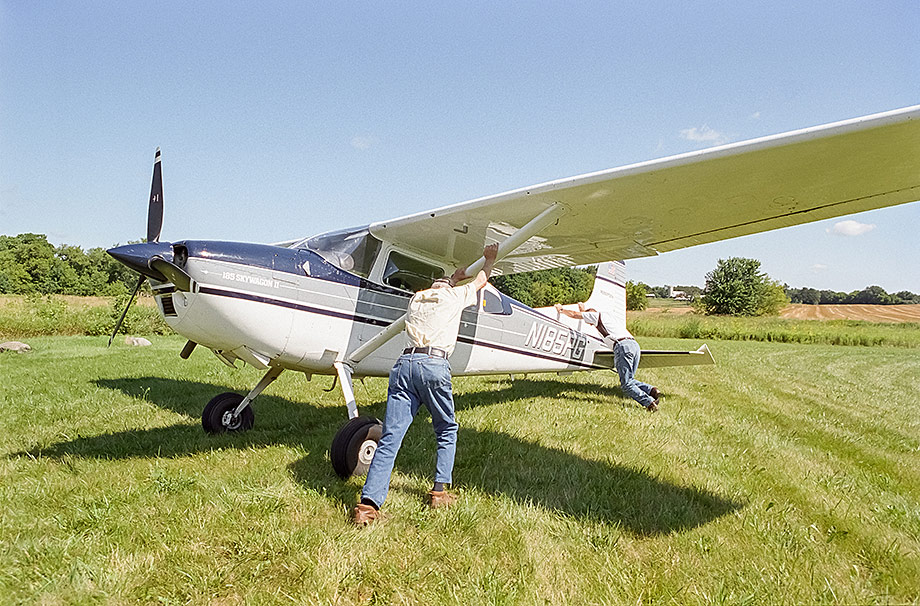 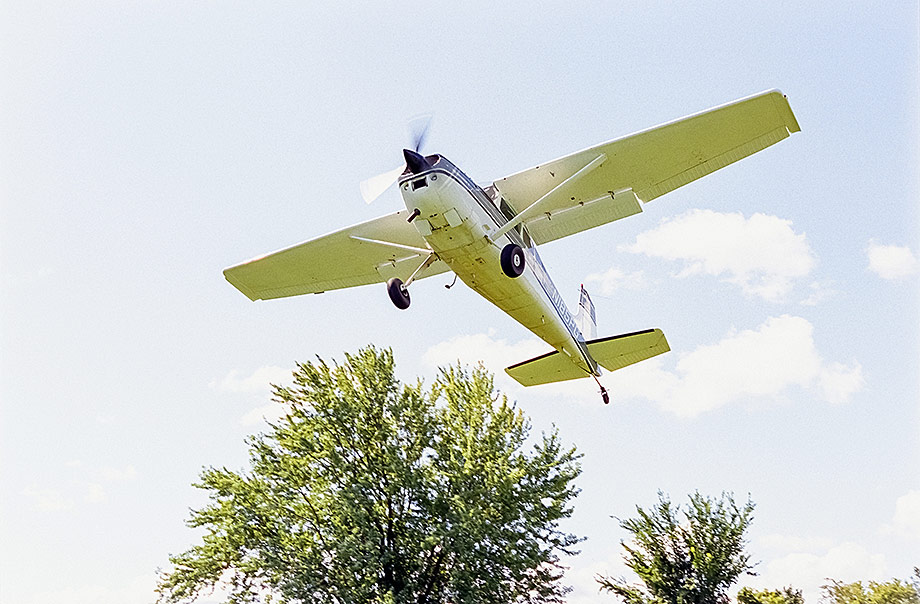 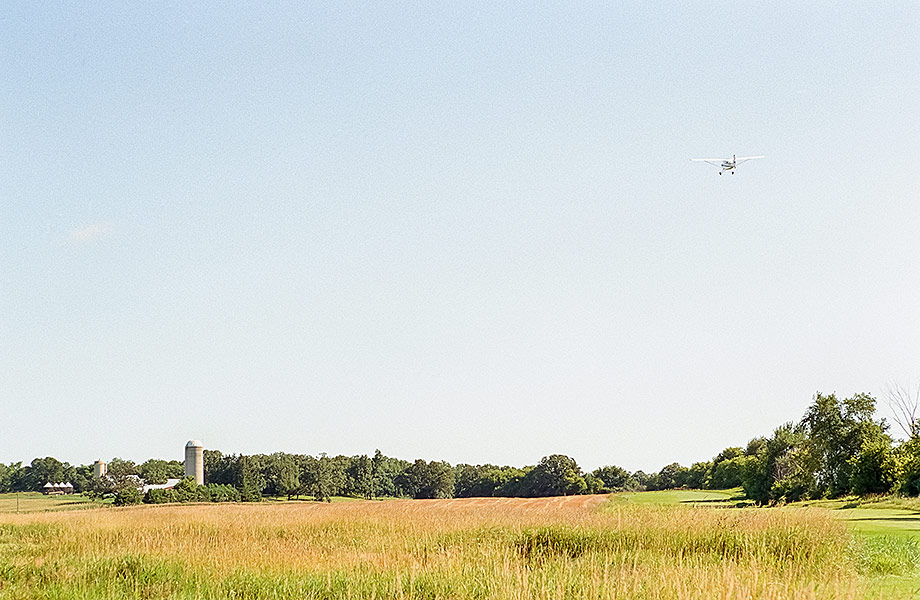 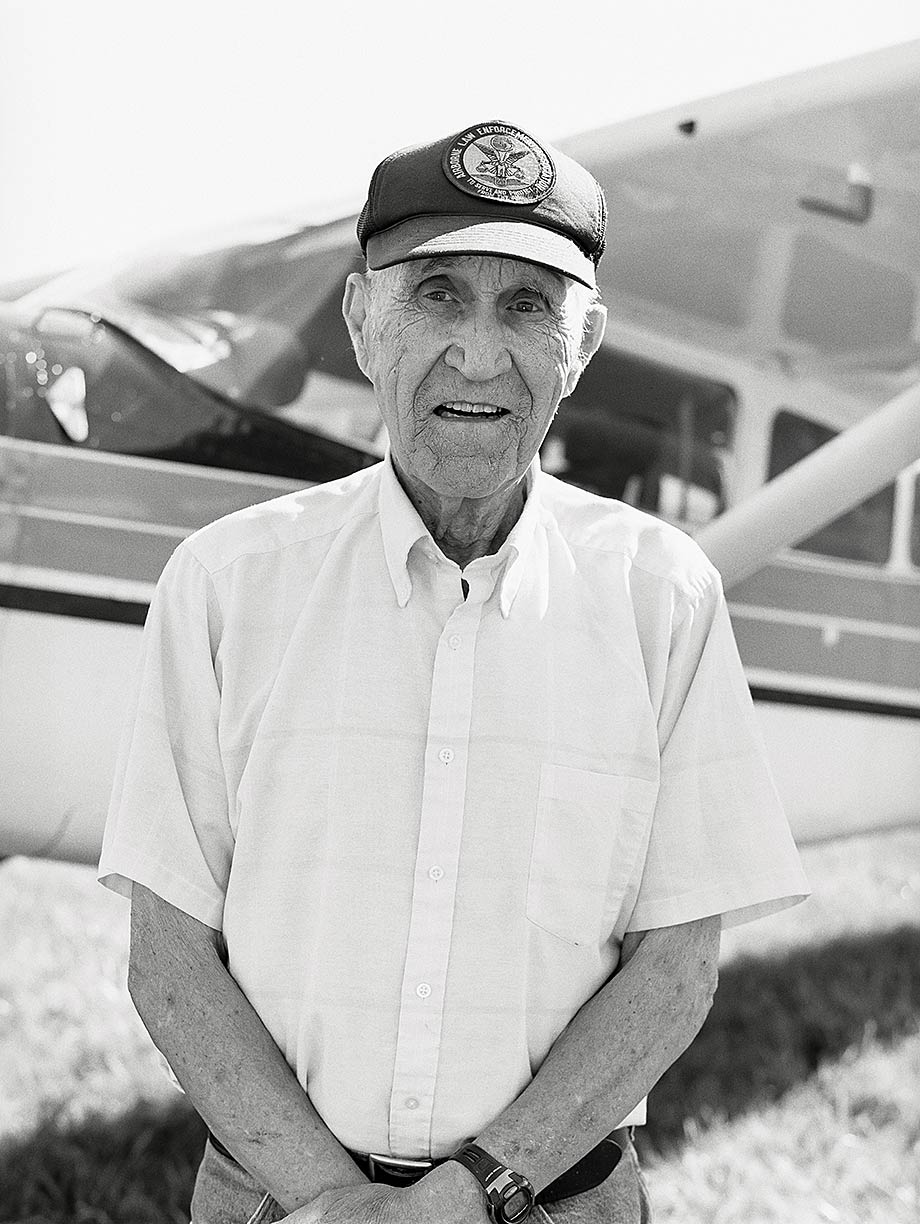 Kathleen Schumacher - I love these pictures of Mark and his father. What a neat relationship they had. You can just see it in the way they look at each other… true friendship and love.
Mark, I am so sorry to hear about your father’s passing. You were lucky to have such a wonderful bond with him. With love, Kathleen.April 19, 2013 – 8:33 pm

James Savinski - David, my heart is heavy, too, but these amazing photographs will serve to keep the happy times with Ken in the forefront of our minds.April 19, 2013 – 12:55 pm